Here are some notes on my experience setting up a Joyent Triton SDC environment. The purpose of this exercise was to evaluate the stability and utility of the software as a replacement for some of the traditional/legacy virtualization options currently in use. I am working on a few experiments with microservice based software and wanted a way to run these little tiny apps with isolation but without needing the reources of a complete operating system (no, i really do NOT want a BIOS and an emulated floppy disk to run this API endpoint :-) As a long time FreeBSD user, I understandably like what jails and bhyve are able to do and they are definately a viable option. However, FreeBSD doesn't yet have a great mangement system supporting the jails + bhyve pattern so this is one reason I decided to give the Triton software a test drive.

I'm not a huge fan of current state traditional / mainstream virtualization. The standard VMware ESX like pattern solves a few problems in infrastructure such as:

While the above benefits are great, at the end of the day in a large enterprise shop, we still may have 50,000 operating systems to patch every week and each of these operating systems may have hundreds of packages, each of which may or may not be trusted depdending on which exploits are active at the time. Also, I might need to pay for licenses for each of these full operating system images - ugh! Wouldn't it be nice if we can start deploying our applications in environments that have less dependencies and smaller attack surfaces? Also, wouldn't it be nice if we could provision in containers that are much smaller (in RAM) than typical hypervisors provide today? I want the hypervisor to be open source and be developed using modern development practices - like using git for example. With the back doors found in Juniper's firmware recently and mystery as to how it actually got there, this type of concern is no longer hypothetical and/or reserved for the ultra-paranoid.

In my opinon, some of the best advancements in virtualization are embodied in both SmartOS/Triton and FreeBD's bhyve.

With bhyve, you get an open source and clean re-do of the legacy/monolithic hypervisor incumbents (e.g. VirtualBox, VMware, XEN, etc). The code is small and builds very quickly and there is even a Mac OSX port called xhyve, see xhyve on github which is already being adopted by developers to create lightweight sandboxes for testing and security applications. Perhaps SmartOS will support it someday too ?

Here's what building xhyve from source looks like on my laptop:

Anyway - we will now get back on track with Triton/SDC :-)

Well it turns out that with Triton SDC, we can apparently have everything we want! I have been following the work done over at Joyent the last couple of years - some of it was for node.js and SmartOS and to say that I've drank the Kool-Aid is an understatment! The Joyent Triton (aka Smart Data Center - SDC 7) pretty much checks all the boxes I had in my "future of virtualization" wishlist. If you haven't heard Bryan Cantrill speak on this (or any subject) - go to you-tube and check out some of his evangelism - it's great.

To get started installing a private instance of Triton, I started with the following resources:

I'm collecting my notes and drawings and I will update this page over the course of the week with some information you might find useful.

Tips for a smooth install

Here's a rough view of how everything is cabled together; my next step is to get the underlay network setup so I can test drive some of the networking features and docker patterns. 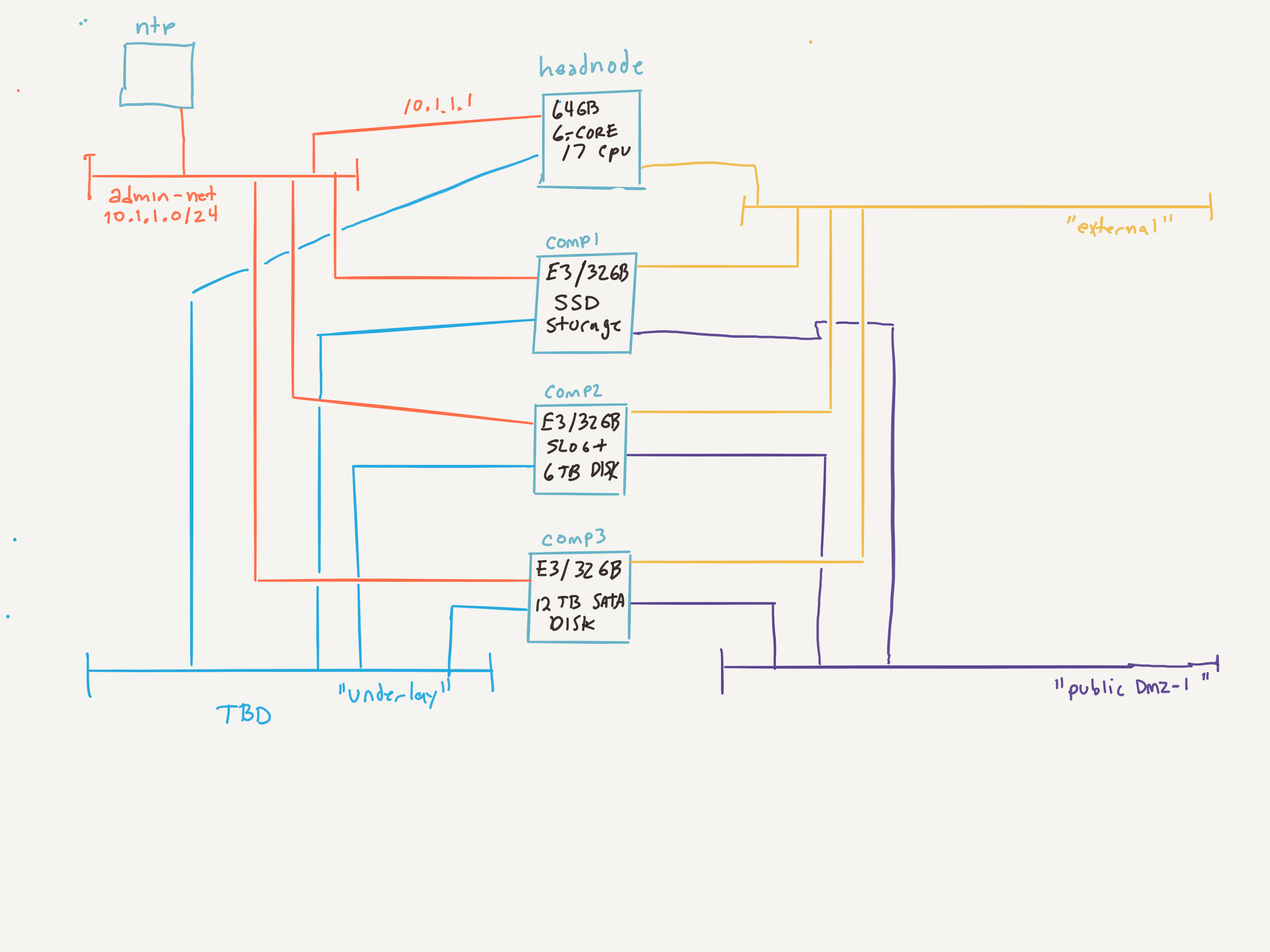 One month status update and upgrade

I am happy to report that my first month of running this cluster in light production mode has been a success. I have performed a couple reconfigurations / reinstalls and also performed an upgrade of all the services. Despite my relative lack of experience with SmartOS and Triton, I was able to manage most of those activitie using the documentation on the Joyent web site.

I was able to perform a rolling upgrade of all the nodes and services using the steps outlined in this script: SDC Upgrade Script. :

I went through each step above manually instead of yolo-ing with the script just in case it did something that didn't make sense. A couple of notes:

Note that the usb-key updates failed on the two compute nodes but succeeded on the headnode. This is normal since the compute nodes do not have usb keys on them since they always boot over PXE.

Also, once the script was run, I used the adminui web GUI to manually reboot each node in the cluster, starting with the headnode, making sure that each node returned to normal before moving on to the next. At the end of the process, all my nodes were at the most recent release:

Anyway, hope you find this useful.